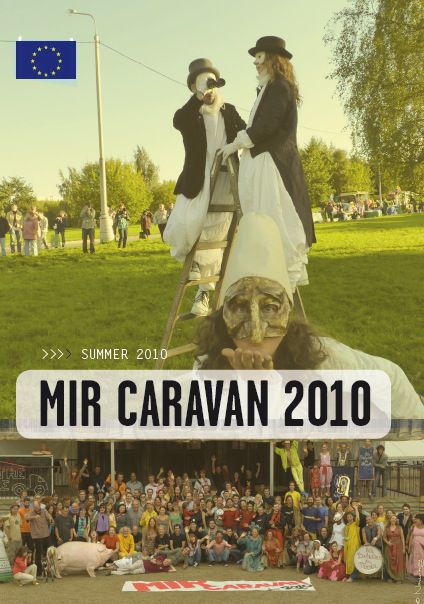 We, actors of all European countries, representing the most various forms of theater, decided to mobilize our resources, our experiences and our workforce for the construction in 1989 of a trans-European tour: Caravan MIR”.

This is how MIR Caravan 1989 was introduced, one of the most extraordinary theater journeys ever created in Europe.

Over 200 artists and technicians, a hundred vehicles and caravans, five tents, 8 permanent groups (four from ‘west’ and four from ‘east’) embarked on a travelling theater festival on the road, starting from Moscow (from the Red Army square) in early May 1989, to stop in Leningrad, Warsaw, Prague, West Berlin, Copenhagen, Basel, Lausanne, Blois. The tour ended five months later with two performances of “The Odyssey” in the Jardin de Tuileries in Paris, as part of the celebrations of the bi-centenary of the French Republic.

At that time of the tour we thought that symbolically “the Berlin Wall” represented the last Bastille of Europe. At that time, the wall not only separated one country, but the whole Europe and, indeed, the whole world. More than 400 shows, with an epicenter represented by a collective creation, The Odyssey, inspired by the journey of Ulysses: a performance that involved more than 150 actors, who created the show on the road from Moscow to Berlin, a giant street performance, superb in its diversity. MIR Caravan was ahead of the times and of history; it was the real first international movement of actors, European and independent. All this was achieved despite the geopolitical context of the ‘Cold War’. It is hard to imagine that six weeks after the end of the tour, the Berlin Wall would have fallen and nowadays, twenty years later, we would like to be looking for a European Union expanded from 12 to 27 countries.

Determined to evidence the changes after the fall of the Iron Curtain, question about the boundaries and the ideologies and to emphasizing the need for intercultural dialogue and cooperation in Europe in the 21st century, the initiators of Caravan MIR 1989 decided to meet under the new ICE Collective Association, chaired by Horacio Czertok and composed by Rudolf Brünger of UFA Fabrik, John Kilby, Jean-Guy Solnon, Slava Polunin, Natasha Tabatchnikova.

In the summer of 2010 they resumed the artistic and real journey they started and connected Brno, Frankfurt am Main, Villeneuve les Avignon, Namur and Moscow.

Download the brochure of the MIR CARAVAN 2010 project: ENGLISH | FRENCH

The project is still in progress.

The new stage of the project was “Odyssee Karavana”, a journey  that was undertaken by 13 artistic companies of the International Center for Itinerant Theaters (ICTI)  towards Europe to converge in five reference cities: in Plodviv, under the Bulgarian sky, in June 2019, when the city was the European Capital of Culture, in Ferrara, in Italy, in Thessaloniki in Greece and in Brussels in Belgium.

Symbolically, the departure took place in Villeneuve-des-Avignon, during the Festival of Itinerant Theaters in France, in July 2018.